The power of the Lotus exquisite jadeite

I love Stephen Chow’s movies. Go watch “The God of Cookery”. In the final battle, Stephen Chow was forced to cook Char Siew rice. The judge tasted his masterpiece, and exclaimed as such according to my splendid translation: God! This simple Char Siew rice is heavenly! How am I going to eat Char Siew rice anywhere else after this?

Recently, I have been spending a lot of time talking to friends and clients about the exquisite collections in Lotus on Water Exquisite Jadeite Gallery. We used to have 268 pieces of proud and wonderful exquisite jadeite – this was during my last blog post some time back, I hope we still have at least 200 pieces of exquisite jadeite left for your selection now. There is nothing in common with our exquisite collections with Stephen Chow’s Char Siew rice other than one characteristic: once you lay your eyes on the collections of Lotus on Water Exquisite Jadeite Gallery, you won’t even flinch an eyebrow when you see jadeite elsewhere.

Because I dare say Lotus on Water Exquisite Jadeite Gallery houses some of the best jadeite collections in the whole world. Only the natural – by an extremely high standard, only the first-hand, only the best. Nothing but the best, then we can expect the best.

In the Exquisite Jadeite Gallery, you will not miss the biggest raw jadeite boulder in Singapore – 850kg. This raw boulder is what that remains. The other parts are all sliced, deciphered and carefully carved into the Lotus collections. This is a mark of the Lotus standard. We rather go through the tedious and dangerous process of harvesting the raw jadeite then to risk the future of our clients by dealing with middleman and middleman. Who can assure you that a random piece of jade is not dug out from someone’s grave, or worn by someone who had serious illness before?

Majority of the raw jadeite will be carved as our entry level auspicious jadeite – a same motif that will come in all the colors of the five elements. And when we come across a part that is astonishingly good in quality, intensely awesome in colors, we will turn it into our exquisite collections. Out of every 300 pieces of Lotus auspicious jadeite, there is 1 piece of Lotus exquisite jadeite. 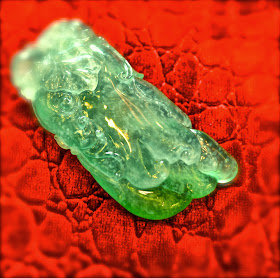 And there are some special collections that will pull this proportion further apart. The imperial jadeite. I quote from a previous post:

It is very rare for jade shops and jewelery shops to sell imperial jade. It is not only expensive, it is also rare and most sought after. Thus the price of imperial jade escalate faster than any other kind of jade. Thus it is often more profitable to keep than to sell them away. It is the highest standard jade can achieve. 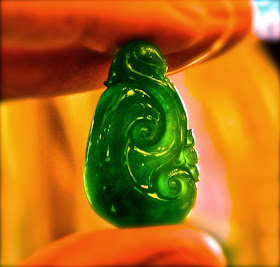 Only the Empress Dowager can wear the imperial jadeite, in the past. Most jade stores won’t have the privilege of owning a piece, and if they do, that particular one piece will be kept in the private safe, only accessible after you have meandered your way pass the B-grade, C-grade and other jade-wannabes.

This is the power of the Lotus exquisite jadeite.