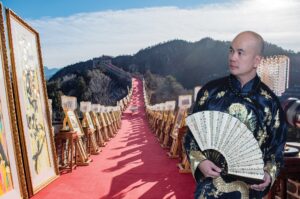 Founded by the sixth-generation Fengshui Master Yun Long Zi, 云⻰⼦大师, and has been inspiring wellness and wealth since 2006, Lotus On Water was awarded Golden Brand Award in 2007, Singapore Prestige Brand Award in 2008, and Successful Entrepreneur Award in 2010.

In 2006, the first main Lotus gallery was established. Lotus On Water Exquisite Jadeite Gallery followed in 2008. And in 2010, Lotus On Water expanded to Marina Bay Sands. The third Lotus on Water Incensewood Gallery and the fourth Lotus on Water Buddha Sculpture Gallery opened up in 2012 for our Lotus clients’ prosperity.